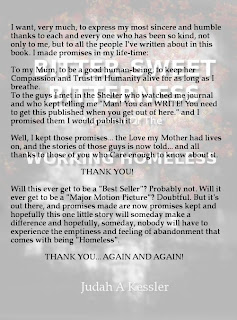 Posted by Judah Kessler at 9:59 AM No comments:

RE: Google searches with my name and results
It's come to my attention that searching my name under Google, the following comes up...
http://www.avvo.com/attorneys/10462-ny-brian-stark-936003/legal_cases/58986
with the following blurb:

ase Conclusion Date: June 30, 2008
Practice Area: Landlord / Tenant
Outcome: Roomate vacated the apartmart by June 30, 2008.
Description: Bronx Housing Index: 26802/2008 Pro Bono Case Margo Baldinger a retired Holocaust survivor allowed a fellow congregant at her Temple to stay on the couch in her apartment. Subsequently, he refused to leave and told Ms. Baldinger he didn't have to leave. On or about April 15, 2008 Ms. Baldinger was referred to our office. We started a licensee(roomate) holdover by serving a termination notice. He refused to leave and we proceeded with serving a holdover petition on the roomate. The roomate entered into an agreement in court to vacate the premises.

Well then. Let's get right on it here...
Indeed, for those of you who have read my book, Ms. Margot (Mr. Stark can't even get her name correct) is mentioned there-in so there's no denying that indeed, she and I were acquaintances and indeed, yes, I did stay at her home, but certainly not as the implied "couch-surfer". I went to Ms. Baldinger shortly after she'd had an automobile accident in which she was rather seriously injured, to make certain that she was well attended to and, I did so for several months. The "association" was arranged through the "Temple" Mr. Stark mentions in his little blurb.

In complete contradiction to the allegations of Mr. Stark, who obviously would like to make himself and his practise appear MUCH more important that it is in fact, Mrs. Baldinger did ask me to leave, because we both agreed that my services and support were no longer necessary.

I did NOT, however, refuse to leave and did NOT, at ANY time, tell Ms. Baldinger that I "didn't have to leave". I was certainly more than willing to leave for many reasons.

Why or how Ms. Baldinger came into acquaintance with Mr. Stark is certainly none of my concern and is of no importance to me.

However, the information that Mr. Stark INSISTS upon maintaining on the internet, in spite of SEVERAL requests to remove it, is, in fact, bold lies. Why he would post such drivel is beyond even my imagination. But he has done so and refuses to remove it.

To this end I should like to state that:
1. At NO time did I refuse to leave Ms. Baldinger's apartment.
2. I was MOST willing to leave Ms. Baldinger's apartment when we both agreed that my presence was no longer necessary.
3. The alleged "Holdover" was concocted by Mr. Stark and
4. I never appeared in court because Ms. Baldinger with-drew from her association with Mr. Stark
5. IF there were ANY proceedings in ANY court, Mr. Stark must have found himself quite the fool for appearing... alone.
6. I have REPEATEDLY asked Mr. Stark to remove these lies from the Internet and he refuses.
7. As is my opinion and that of others in whom I have confided:
Mr. Stark is an un-known person in the city of New York who has managed to obtain a "law degree" and feels that he MUST make some sort of "name" for himself at any expense. Therefore, he has chosen to present a simple, personal matter between Ms. Baldinger and myself on the the internet and has embellished quite liberally according to his delusions of grandeur and to soothe his need for self aggrandizement.

I can and will state here: On the evening of my departure from Ms. Baldinger's apartment, she handed me money to help me on my way and as a fulfillment of a promise made MANY months prior (a promise which I disregarded... but she'd made to me to "help" me when I left her apartment). Her very last words to me on that evening were: "Can I have a kiss?"

I now as readers: Does this sound like a departure due to an "agreement" entered into in a court of law? For the records... I never appeared in a court concerning any matter(s) between Ms. Baldinger and myself because it never became necessary to do so. And, indeed, here and now, I will certainly, and with no hesitation, state that Mr. Peter Stark is a blatant liar.

Hopefully, this information will find its way into the "Google" searches and the "Truth" will be equally available to those who search my name, for what ever reason they may have.


Posted by Judah Kessler at 9:22 PM No comments: